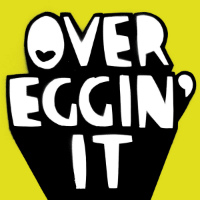 Look out, those dirty Mongrels Kid Acne and Benjamin have re-surfaced with vinyl 7″ Over-Eggin’ It backed with Shoot The Breeze on the flip. Yes, it’s another installment of that ol’ South Yorks uproar and they’ve only got Sleaford Mods’ Jason Williamson providing the hook on the former while Cappo and Juga-Naut juggle verses with Mr Acne on the latter. With Benjamin’s dirty-as-fuck drum breaks and this level of lyrical ingenuity we could have the answer to all Brit-hop’s problems – “Jigamy, as we predicted/ pushing forty and still doing this shit/ That takes the biscuit/ but don’t get it twisted, the kid mad gifted/ Spit a sick lyric here for those who missed it/ When he goes in, crowds go ballistic, innit?/ Well, in his mind anyway/ that’s where he live most days so that’s ok.” What’s that Jason? I’m over eggin’ it? Sorry – didn’t mean to step on any toes – let’s just shoot the breeze then. Good lord, it’s a multi-referential whirlwind of twentieth century pop culture – the Justified Ancients Of Mu-Mu, Edgar Rice Burroughs’ John Carter, John Boorman’s Zardoz, Robin Of Sherwood – er hang on, it’s the twenty-first century boys – haven’t you got anything more up-to-date? “Rhymes by the boatload,” – yep – over-crowded watercraft are topical – and what’s that? “I’d rather be comfy, I’m hungry, I like my oatmeal lumpy…things in this country ain’t how they should be.” Well, there’s a sentiment few will disagree with, though if music like this is still coming out, it’s not all gone to the dogs. Let me hear you say South Yorks uproar!
(Out 29 September on Invisible Spies HERE)

Posted on 25th September 2018 no comments