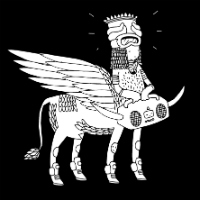 Back in the 90s, rapper Kid Acne and deejay Benjamin were Mongrels from South Yorks. (South, South Yorks!) who made a series of demos and half-finished cuts featuring frequent contributions from New Kingdom rapper Sebash a.k.a Sebastian Laws who was (if not from the South Bronx, the South, South Bronx) actually from New York City. And yet for one reason and another, said demos and unfinished work spent the last decade or so in a shoebox. Which is a shame really because the combination of raw drum breaks from beat-hoarder Benjamin and stream-of-consciousness lyrical mayhem from Kid Acne and Sebash provide an antidote from the slick, empty monolith that hip-hop has become. Maybe it’s just as well that the dream team has decided to unearth said early work then, hook-up with Sebash again and revised everything through the prism of additional life experience to release the record they were trying to make twenty years ago.

The duo describe Sebash as an honorary member of Mongrels – as well they might since he appears on ten of twelve tracks – on two of these alongside another guest UK emcee Lord Rao and on a further one alongside fourth guest Juice Aleem. Naturally the stream-of-consciousness nature of the lyrics results in stuff that veers between being either amusingly nonsensical or profound if not managing to be both at the same time. References encompass a Beastie Boys level of scope taking in Neneh Cherry, UK brit-hop pioneers Gunshot, logistics company Eddie Stobart, kids cult cartoon Ulysses 31 and classic b-boy sneakers. There’s even a whole track, Zodiac Rockerz, that I wouldn’t be in the least surprised to find is a homage to Ad Rock’s end of first verse line in Beasties track Unite. However, the surreal feel of the LP (intensified by the contrast between Sebash’s NY growl and Acne’s Sheffield tones) has more in common with, say, DOOM’s more tongue-in-cheek moments than typical Beastie business though ultimately it is truly like neither, except in spirit. It’s not all surreal either since closer Full Of Regrets delivers a proper narrative about a loser. Well I say ‘not all surreal’ – Benjamin still incorporates an inspired use of a sample of dialogue from Paddy Considine’s pathetic loser character in Shane Meadows’ superb A Room For Romeo Brass. Mongrels then – they stay tight but they’re never ever contrived.

No full album audio yet but check out the video from lead single Full Moon/ Half Moon which does nothing whatsoever to decrease the outfit’s aura of surreality by mixing up footage of Acne and Benjamin wandering around Cleethorpes with clips from cult 80s classic alien lizard invasion series V, cult 80s sword and sorcery classic The Beastmaster, the cult original Wicker Man and weirdo doomed Conquistador epic Aguirre, Wrath Of God.
(Out 10 June on Invisible Spies)