MOMO SAID: Sunny Side Of The Street 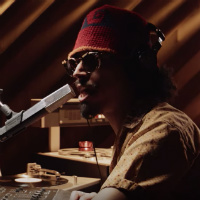 Momo Said finds the Sunny Side Of The Street for the lead single off his forthcoming second album Break The Rules which follows in early autumn. And it’s very much the side of a street that is not merely sunny but forever NYC disco-central circa 1977 judging by the chugging four-to-the-floor Earth Wind & Fire meets Indeep-style funky disco on offer here. I reckon if he topped that off with a video featuring himself doing a Cleavon Little-in-Vanishing Point turn as a radio disco jock DJ intercut with footage of the band playing live he’d probably have a summer winner on his hands. Certainly one C. Charles esq. has been giving mad props to the man and that’s not to be sniffed at.
(Out now on Tam Tam Studio Records)