MEGATIVE: One Day…All This Will Be Gone + Live in-studio video 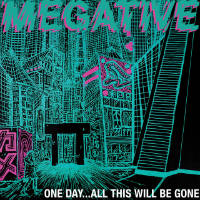 With the release of third single One Day…All This Will Be Gone, Megative confirm their twin missions to deliver the sound of The Specials-as-produced-by-Massive-Attack whilst single-handedly propelling the evergreen Merc, Fred Perry and Ben Sherman labels right back to the forefront of fashion. Naturally the sort of claustrophobic dub vibe propagated by Daddy G, 3D et al doesn’t really lend itself to upbeat ska entitled things like Enjoy Yourself and the vibe is more Ghost Town-laden than ever. It’s tricky to imagine what sort of conjunction of social-historical influences could possibly generate such a response in popular music in our times of boundless optimism but there you go. Not that this is miserablist though – far from it. It’s the band’s invitation for you to take the long view about anything that upsets you. Indeed, if you were in a particularly Jerry Dammers-ish frame of mind, it’s practically the subtext of Shelley’s Ozymandias set to dub-reggae. As singer Tim Fletcher floats into a falsetto for the hook, try thinking of the 1% or some loudmouth reactionary politician/ media mogul/ corporate CEO whose shit you’re sick of and imagine that one day…they and everything they’ve ever built will be gone. Lovely. Obviously you will be too though – unless you can afford cryogenic storage and who’s got that kind of money…oh. Wait. Live in-studio vid. below.
(Out now on Last Gang Records)