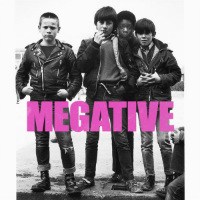 Here we go then – Megative’s debut LP channelling the sound of Ghost Town-era The Specials as if produced by Massive Attack across eleven tracks. What’s that – you wanted a proper review? Like that’s not enough to have you immediately seeking out a copy? Ok then, well, let me see now – I suppose there’s a bit of The Clash in there too (not least of which in the ketamine-speed cover of Ghetto Defendant) and a post-punky feel to She’s Not Real and Beneath The Sun the album’s jauntiest cuts – well – most uptempo anyway. A jaunty album this isn’t. But then that’s not what the band – consisting of ex The Stills vocalist Tim Fletcher, Stills-producer and Me, Mom & Morgentaler band member Gus Van Go, production duo Likeminds and dancehall legend Screechy Dan are about.

The mission is a zeitgeist-capturing one after all. Just as Ghost Town perfectly caught the depressing de-industrialisation of the Thatcher/ Reagan years and Massive Attack’s increasingly paranoid trip-hop and dub FX tapped into the early stirrings of the world we have now due to de-stabilisation in the Middle East with all its knock-on effects, Megative picks up on the hyperreal, post-truth world of now. A world in which we face a multi-headed hydra of Trump, Putin, a resurgent European far-right, corrupt collusion between social media and political forces, money laundering via major international banks and shell companies – a monster which seems to have Teflon survival powers and a spectacular ability to deflect blame. The sort of era, in which a sense that things aren’t as good as they were is permeating at multiple levels of social consciousness. If the dubby skank of former singles More Time and Can’t Do Drugz (Like I Used To) seem at first to explore a sense of waste and regret on a personal level, the vibe is more obviously related to the world around us on the apocalyptic closer (another former single) and most-Massive Attack-like cut on the LP One Day…All This Will Be Gone. Here, doom-laden retro movie dialogue ushers in a claustrophobic Mezzanine-ish bass-line that after a few bars is joined by a minimal guitar skank and Fletcher’s vocals which soar off in lonely falsetto on the hook.

Elsewhere, the midtempo skank of Yeah Yeah Yeah is the most Specials-like cut with it’s slo-mo ‘Oi!’ hook and a fiery star vocal turn from ‘Judge’ Screechy Dan, while Bad Advice implies a bit of awareness and self-reliance whilst standing firm against the darkness might not be a bad idea in these benighted times. Like all the tracks here, anything political is implicit rather than clumsily specific and overt – you understand the deal without being preached to with names and events. And lest you think this all sounds a bit niche, make no mistake that despite the recurring themes of regret and anxiety, dub FX and stylistic nods to the darkest moments of Two-Tone, there is a pop awareness on all the tracks that ensures that when, (as well Jah Shaka, King Tubby, The Clash and the Two Tone scene), the PR references Gorillaz, it doesn’t sound far-fetched. No doubt it doesn’t hurt that all the band members have some measure of music scene success in a variety of scenes, if not out front like Stills and Screechy Dan, then in the production booth (Likeminds credits include working with the Wu-Tang, The Roots, Snoop Dogg, and Kanye West) or both, like Van Go. All in all, Megative are set to go very large indeed.
(Out now on digital and Ltd. 140g white vinyl on Last Gang Records)

Posted on 5th August 2018 no comments