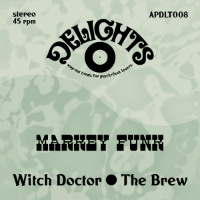 Look out – Markey Funk’s box of delights is open once again and this time it’s new psych-funk 45 Witch Doctor that slithers out. Working his production voodoo, he crafts initial Delia Derbyshire-esque synth swirls that rapidly give way to a phat drum break apparently recorded by like-minded space traveller Dan Mayo of CRuNCH 22 and then the heavy fuzz guitar kicks in. No self-respecting purveyor of psychedelia could leave it at that though so expect chugging organ riffage buried in the mix at various points – oh – and did I mention the tortured human voice chanting or speaking in tongues throughout? Well – it’s not easy being a sacrifice. Perhaps some light relief on the flip? Nope, it’s The Brew – or what back in the day would probably have been referred to as Witch Doctor Pt 2 – i.e. a continuation of the A-side – in this case, it seems, after considerably more mushrooms had been consumed.
(Out 22 September on Delights)