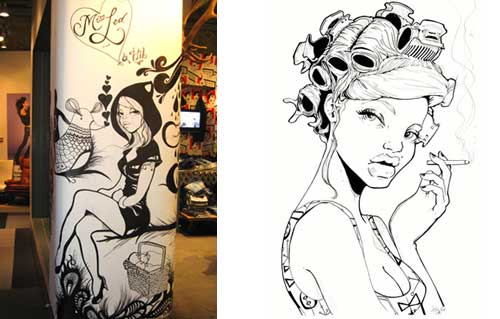 She might be called Miss Led but there’s no deception in Joanna Henley’s artwork – her stuff is as dope as it appears to be. The only ever female winner of urban street art comp ‘Secret Wars’ in 2007 – it’s not hard to see why she has been referred to as the ‘first lady of street art’. In the two years since establishing her own business Henley has amassed a portfolio that includes work done for Diesel and Reebok as well as a range of magazines. Clearly influenced by comics and pop art, she’s highly versatile and seemingly happy working in any medium and size, dealing in a fairly substantial portion of her work with preoccupations like the female form and sexual power. What else do you need to know? Oh yeah – she likes jazz and drinks tea a lot.