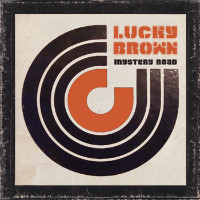 Mystery Road is the follow-up to 2011’s Lucky Brown’s Space Dream and finds Mr Lucky Brown still bowling happily down the retro funky soul blacktop with even greater gusto than before. This project is comprised of a series of tracks all apparently intended as 45 singles and all played with a different band. Anyone familiar with Tramp will be aware of the label’s curation of lost sixties and seventies black music (often consisting of crusty old super-rare limited runs, test pressings and private pressings) and wondered how long this seam of vintage funk and soul can continue to be mined. While the end doesn’t seem to to be in sight yet, there is no obvious need to be to worried if Lucky Brown is around since Mystery Road proves him amply capable of supplying ancient-sounding funky soul instrumentals. Fourteen of them to be precise, replete with analogue hiss and those middle frequencies you just don’t get on digital recording. This is, in fact, the essence of the much claimed but rarely achieved (outside of the Daptone studio) ‘shitty is pretty’ approach outlined by Gabriel Roth.

Among the gems are Mystery Road – which works along the lines of the sort of raw groove that featured as inspiration for G Love’s first LP and the swamp funk of Chicken Rock. Brown’s Bag Pt 1 and Golden Nugget turn on nifty horn sections contribution, Tibor is a super heavy chanking groove, Buddha On The Road goes deeper featuring a bit of Rhodes piano and Santosa appropriately (given its title’s similarity to ‘Santosha’) is a honey-sweet slow jam practically crying out to close the sort of retro surf flick that the Moonshine Conspiracy used to put out. One for lovers of funk, soul, rare grooves, analogue warmth and phat drum breaks.
(Out now on Tramp Records)