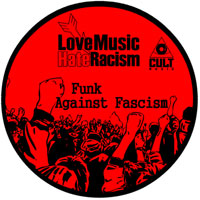 There are many reasons to reject fascism in its many forms – the one-dimensional, ‘might is right’ attitude, the staggering lack of logic in its ideological arguments and crucially – the shit music. Wagner and Skrewdriver? Christ! Enter breakbeat deejay Totalcult who (in collaboration with Love Music, Hate Racism has been marshalling the rebel forces and assembling an international alliance of funky breaks-loving volunteers to carry the party to the enemy. Funk Against Fascism features both grizzled commandos like Fort Knox Five and Badboe and well as young guns like Ewan Hoozami and Totalcult himself. You also get an array of funky artillery covering all angles from the dub-breaks of Timothy Wisdom, to the p-funky grooves of Totalcult, to Ewan Hoozami’s ghetto funk ‘Manhattan Project’ Boob Job. And if that’s not enough to persuade you to get your money out, you’re either in the EDF or tighter than a Tory government in a recession. All tracks from the album will be exclusively previewed in a special guestmix tonight (i.e. 25 October 2011) at 8PM GMT on the Mother Chip Show on Space Invader Radio (Live Stream HERE). ‘Ave it! Full tracklist and PR below player and link…
(Out 4 November on Cult Music)

(PRESS RELEASE)
‘Funk Against Fascism’ is a charity compilation raising money for ‘Love Music, Hate Racism’. Artists from Birmingham to Brazil have come together to create an eclectic album representing the broad spectrum of breakbeat sounds, from chilled out funky hip-hop to fierce, bassline-driven acid.

Every penny of the artists’ and label’s royalties will go directly to the charity, which supports anti-racist and anti-fascist activity and runs campaigns urging people to vote against fascist candidates in elections. No other charity celebrates cultural differences like ‘Love Music, Hate Racism’ and no other music genre revels in sonic diversity more than the breaks scene. It’s a match made in heaven.