LITTLE BARRIE & MALCOLM CATTO: After After 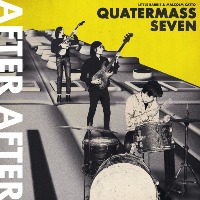 Blimey, MB was still active on Myspace and Blogger the last time the monkey covered any Little Barrie material! That notwithstanding, here’s this, a.k.a. new single After After – a fuzzed-out, psych-soul affair from the band that sounds like an instro-jam by Curtis Knight & The Butlers featuring a young guitarist by the name of James Hendrix. Not that that’s any cause for complaint. Currently sans drummer after the untimely passing of Virgil Howe it seems the remaining members of the band (i.e. guitarist/vocalist Barrie Cadogan and bassist Lewis Wharton) have hooked up with Heliocentrics sticksman, Mr Malcolm Catto for an alliance which has resulted not just in this single but a whole LP – Quatermass Seven. Bring it on!
(Out now on Madlib Invazion)