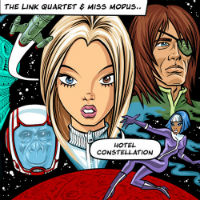 Hammondbeat Records mainstays Link Quartet team up with Julie Driscoll-esque, none-more-mod vocalist Sarah Kennedy (a.k.a. Miss Modus) in order, to deliver concept LP Hotel Constellation. Essentially combining what ought to be two diametrically opposed concepts – i.e. funky mod-rock and prog) – the band and singer manage to do what is more or less a mod-psych-funk re-imagining (or at least parallel universe version) of the big-band-soul-jazz-lounge odyssey that is the soundtrack to saucy sixties sci-fi epic Barbarella. Talking of odysseys – there’s over six minutes of synth-backed spoken word narrative on this before you even get to the first proper song of the title track. And thus it continues throughout – each actual song partitioned from the next by some English bloke delivering the next episode of the ongoing space-opera prog bollocks narrative. Just as well the songs are alright.

There are nine of them by the way, actual songs that is – there’s even one, a hammond-funk wigout, called Barbarella. It’s not completely hammond-drenched though – at other times synths rule (Second Skin), and near enough everything on here features prominent guitar. Stop Calling is steeped in fuzz and has nearly as much in common with early Deep Purple as it does with Bryan Auger for example. It all comes together most successfully though on Wrecking Machine where chugging riffage and dirty wah guitar combine with organs and Kennedy’s singing in a kind of blue-eyed mod-soul homage to Ike and Tina. Plenty to get down with then but make sure the egg-cup swivel chair and lava lamp are handy for the prog interludes.
(Out 31 March on Hammondbeat Records)