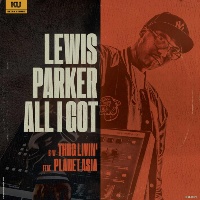 Now then, who likes to recline and max with the illest tracks, master the dope joints so the shit be sounding phat on wax? That’s right, it’s producer and sometime emcee Lewis Parker who is back with 12″ vinyl single All I Got on 7 May this year. And ‘all ‘Lewis has got is a head-nod groove and his own mic skills which is plenty to perk up your ears and soundtrack your city drive-time before I even tell you that Cali Agents’ Planet Asia guests on the gritty, 90s NYC-sounding dope of flip Thug Livin’. Yes, Parker might be “Hackney-bound,” but that doesn’t mean he doesn’t like to cross the pond occasionally for a collab. It seems both tracks will appear on Parker’s forthcoming new album.
(Out 7 May on King Underground)

KingUnderground · Lewis Parker – All I Got