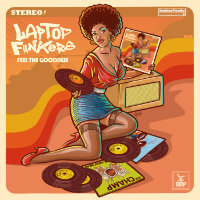 Laptop Funkers follow up 2013’s Ready To Rumble EP with an eight-track mini album, Feel The Goodness, that suggests the intervening three years have left them champing at the bit. Why? Because here are bouncing party breaks that hark back to the glory days of early big beat and set them alongside like such latterday non-wobble big beat like minds such as Rory Hoy and DJ Axe. Funky feelgood tunes is the name of the game and it’s upbeat basslines, snappy drums and choice vocal samples from start to finish. The DJ Mr Cee-sampling Where The Funkers At is the hip-hop friendly one, elsewhere it’s pretty much Chemical Fatboy business. Perhaps the stand-out track is I Can Keep It Going and frankly – on the evidence of this – I wouldn’t question them on that score.
(Out 11 August on Juno, 12 August elsewhere on Breakbeat Paradise)

One Response to LAPTOP FUNKERS: Feel The Goodness (2016)