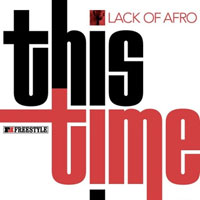 It seems Lack Of Afro’s recent single was a spot-on indicator of what to expect from Adam Gibbons on his new full length effort This Time which supplies things catering for all needs broadly soul/ funky from the coffee-table to the dancefloor – or from the atmospheric to the banging if you’re sensitive to the term ‘coffee table’ – some people are you know – it’s all the espresso – makes them uptight. Anyway – let’s see how he did on his ‘difficult third’ album.

Kicking things off is the dreamy Prelude followed by the Jake Morley-featuring Holding My Breath which ventures into the kind of territory currently being explored by Smoove & Turrell and with equal facility as does the somewhat more chilled Wayne Gidden vehicle and current single A Time For. There’s been loads of guff talked all over the place about this cut but the truth is it’s a competent slice of late night soul and – er – that’s pretty much it – you’ve heard it all before. What The Hell on the other hand, which also features Gidden, is a far superior number in the mod/ northern soul vein, livelier, more raw and a dancefloor belter – the best thing of it’s kind since The Bamboos You Ain’t No Good the other year. Among the other vocal tracks two in particular stand out. Fool finds Angeline Morrison doing her best Dusty showing her performances on other Freestyle signing Frootful’s album Colours were no flash in the pan. You’ll definitely want to check when Gibbons gets his hip-hop on too what with Def Jam emcee Wax and his twin brother Herbal T rhyming hammer and tongs over some raw uptempo funk-based insanity – the album highlight beyond a doubt. The LP is also peppered with a number of instrumental cuts that vary in style and tempo but by far the best is closer Lazy Lazarus with it’s tremeloed sixties guitar and heavy shuffling rnb beat. Nice job – and that applies to whole shebang in general too. Full PR hyperbole below the highly amusing video to A Time For featuring David Schneider (The BBC’s Tony Hare’s in Alan Partridge) as the UK’s least favourite public official. I fucking hate traffic wardens.

(PRESS RELEASE)
Lack Of Afro (Adam Gibbons) has achieved a startling amount in the few years since his first Freestyle releases. Playing live and DJ-ing across the world, producing and remixing everyone from Tom Jones, The Pharcyde, The New Mastersounds through to Kraak & Smaak!

In 2011, as well as collaborating on an album project with Eddie Roberts of The New Mastersounds, having also produced and played on the album, Colours by Freestyle label mate Frootful, Adam somehow found time to create what is, without doubt his strongest album yet: This Time.

A wide ranging and eclectic, progressive musical outlook has always been the Lack Of Afro approach, and on this collection the music pulls together several strands into a fantastic, homogenous journey with almost too many highlights to mention! Several top notch vocalists feature, Jake Morleys Holding My Breath with its moody minor key feel riding over an aggressive rhythm track is one tune that is bound to find favour on dance floors worldwide.

A Time For with Wayne Giddens’ smoky, falsetto voice is already gaining a reputation as Lack Of Afro’s most genuinely soulful composition ever, evoking as it does a mid 70’s sound that Al Green, Curtis Mayfield or Marvin Gaye would have been rightly proud of. Already available as a 7 inch single/download (FSR7069) the amazing feedback to this beautiful song ensures it will certainly become renowned as timeless classic.

Fool is a track that echoes 1960s pop-soul of artists like Dusty Springfield, as Angeline Morrisons sweet voice rides over orchestral strings, whilst on The Importance Of Elsewhere Angeline displays fully deserved soul credentials and her contributions mark her out as a rising star in 2011.

With flavours of afrobeat on Contusions, the laid back far eastern tonality of Little Fugue, Def Jam Records star Wax rocking all over P.A.R.T.Y. alongside Herbal T, and a smattering of well rounded and grooving instrumentals like Lazy Lazurus, This Time is the Lack Of Afro album we have all been waiting for. Considered, soulful, contemporary yet retro, accomplished certainly and setting standards in modern music others will struggle to follow.