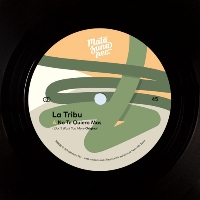 A new Latin funk 45 delivery arrives from Matasuna Records whose unerring ear for an under-represented classic sees the label drop the first official 45 reissue of La Tribu’s hard-to-find 1971 classic No Te Quiero Mas (I Don’t Want You More). Originally released as the B-side to the Mexican outfit’s most famous track (the much less groovy traditional rock cut Por Perdete), No Te Quiero Mas comes on as vaguely Tighten Up-ish number featuring a similar jangly riff – albeit played by horns rather than guitar and with equally furious funky drums. On the flipside, regular Matasuna remixer Voodoocuts extends the track by approximately a minute, beefs up the drums and extends the breaks to make a funky number that much funkier whilst still sounding ‘seventies’ – like the absolute legend he is.
(Out 8 April on Matasuna Records)