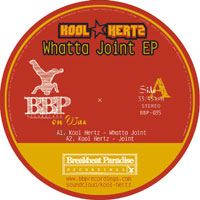 Kool Hertz seems to be operating on the correct frequency here with his new four track EP Whatta Joint as he raids funk and hip-hop’s glorious past for the benefit of the ghetto-funkin’ yout’. In fact he manages something of a generational bridging manouevre between the bass-wobble-addicted kids and aging b-boys by dint of employing – well – wobbly bass and old school boom-bap breaks. It’s a plan that works well throughout but is best experienced on the Funkdoobiest/ Cypress Hill-appropriating Wopbabalubop and the Linda Lyndell-plundering title-track. A mighty, mighty good plan, then, you might say. See what I did there?
(Out now on Breakbeat Paradise Recordings)

(PRESS RELEASE)
BBP Recordings is back with another hot 12” vinyl of party bangers from one of the key players in the Nu Funk/Ghetto Funk Scene – Kool Hertz from London. A 4-track EP of absolute dancefloor dynamite that are gonna slap around funky crowds all across the globe. Pumped to the maximum with funky breakbeats, banging ghetto bass and samples from good ol’ days – this is a sure shot for all funky DJs.

Posted on 22nd September 2011 no comments