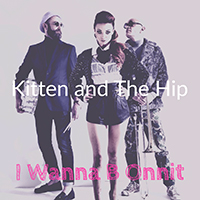 Kitten & The Hip leave electro swing behind with new one I Wanna B Onnit and head for the sunny urban pastures of early 80s New York with the disco vibes of I Wanna B Onnit. “I love everything on your body and the thing I like…on it most is me,” sings Kitten Quinn to hubby Ashley Slater of Freak power fame who responds with the kind of rapping that hasn’t been heard since the early days of Sugar Hill before lapsing into song and generally reciprocating the sentiments of Quinn’s verse. All of which bodes well for marital bliss at Slater towers as well as dancefloors at the likes of Craig Charles Funk and Soul Club nights – especially as this will be accompanied at some point by a package featuring remixes from Rory Hoy, Ginger Shinobi, Jan Lindval, Mark Lower, Manu Vassili Gemini and others. Video to follow.
(Out 23 October on HipKit Records)

Posted on 12th September 2015 no comments