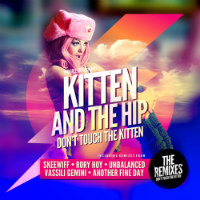 Jailbait/ pervy uncle electro-swing combo (and signings to Skeewiff‘s Pedigree Cuts label) Kitten & The Hip is actually the second coming of Ashley Slater (the Hip), frontman of 90s chart-bothering, Norman Cook-featuring acid-jazzers Freak Power. Turns out Slater isn’t the only one coming given the recent flurry of furiously jealous tabloid masturbation over Kitten’s stripper past and her marriage to the considerably older…Ashley Slater! Apparently, it wasn’t worth mentioning that Kitten can actually sing and that the pair know how to write a tune. Still that’s what you get for appearing on the X Factor. All that aside, single Don’t Touch The Kitten gets 5 refluffs on this EP, three of which might be of interest to MB readers. Another Fine Day slips a bit of jazzy broken beat in its thong and Rory Hoy delivers an ass-slapping stomp but it’s Skeewiff’s light electro-latin swing caress which ends up getting the extras. Keep your eyes peeled on the set below since Skeewiff’s adding to it in the lead-up to the release.
(Out 6 October on Pedigree Cuts)