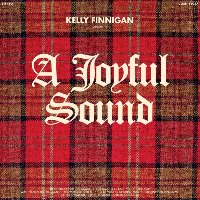 A Joyful Sound? God knows the world needs one after a year as miserable as this. It’s enough to make you yearn for those pre-irony Christmases of yore when artists made Yuletide songs – hell, whole albums of Yuletide songs and you could settle down by the fireside to enjoy them in your reindeer-pattern jumper, egg-nog in hand. Step forward Kelly Finnigan and Colemine Records (who recognise a gap in the market when they see one), with this eleven-tracker that mines (thank you, I’m here all week) the sound of Atlantic Records’ Soul Christmas and Rotary Connection’s Peace for inspiration. And the family atmosphere doesn’t end there either for joining Finnigan to provide the backing music and vox are a host of luminaries from the contemporary U.S. soul scene including members of Durand Jones & The Indications, The Dap-Kings, Ghost Funk Orchestra, Monophonics, Thee Sinseers, Orgone, Ikebe Shakedown, Jason Joshua & The Beholders, The True Loves, Neal Francis, Jungle Fire, Delvon Lamarr Organ Trio, Ben Pirani, The Jive Turkeys, The Ironsides, The Harlem Gospel Travelers, Rudy De Anda and Alanna Royale.

Establishing a suitably festive atmosphere at the start of the LP is the beatless seasonal ambience of the title track which is succeeded by slowie Heartbreak For Christmas on which Finnigan showcases his Smokey Robinson-esque falsetto. Later on Just One Kiss demonstrates faster tempos and funky breaks and later still, former single Santa’s Watching You provides evidence that our man is more than capable of getting his seasonal growl on when he wants to. Expect lyrics for couples in love at Christmas, couples breaking up at Christmas and singletons about to get it on at Christmas along with more sleigh bells and midwinter soul warmth packed into just over half hour than has been heard in many a decade.
(Out now on Colemine Records)

Posted on 20th December 2020 no comments