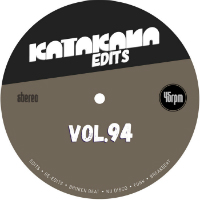 If Private Eye released Katakana Edits they would definitely release Vol. 94 which – once again – features the work of party breaks’ very own ‘Mr Prolific’ – Morlack. Actually, this four-tracker has been out since 20 December but you know how it gets at Christmas. Ironically, now the party’s over, it’s all party action on this. Opener Wipe Mo is a pumping bit of something in the Soca line, Wonderful re-boots a vintage slice of Kid Creole & The Coconuts circa 1982 and Whip re-boots a vintage skanking slice of Derrick Harriott’s Let It Whip circa 1983. Most ‘party’ of all however is second track Dance Dance Dance on which afro-Latin percussion collides with disco stylings.
(Out now on Katakana Edits HERE)