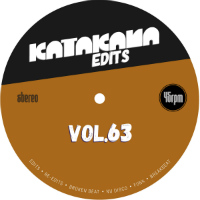 Leaving his beloved DC go-go at home for a change, Morlack is nevertheless lured out of his den with the promise of a whole EP to himself in the form of Katakana Edits 63. 63!. I can’t keep up – they were only on Vol. 51 in October! Still, all that aside, Morlack delivers a set of four beefy edits – bookended by the disco-friendly pounding proto-house of Chic/ Whitney mash Your Love and Do It 2U Right which reboots Prince’s Do It All Night in heavyweight edit format. If those two are the bread in this funky sandwich however, the filling is even better. This comes in the shape of the stomping Wop (don’t worry – no racial controversy there – it’s merely a shortening of the original, almost certainly onomatopoeic title) which reworks funky 80s new jack swing obscurity Woppity Wop by General Kane and a pounding re-version of We’ve Got The Funk by Brit-funkers Hi-Tension. That’s right, this drop is all about the 80s funk. Should that not be enough Morlack for you, why not also check out the man’s latest edit, Jungle Lion, (below Katakana players below) which packs enough reggae wobble to have been featured on one of BBP’s Breakin’ The Riddim comps – although now I think about it, Morlack had a cut on the last one of those anyway.
(Out now on Katakana Edits)