KARATE BOOGALOO: Marriage For All (Or None At All) 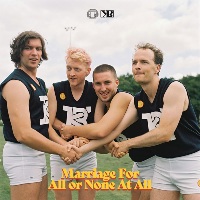 Melbourne ‘cinematic funk’ outfit Karate Boogaloo return with new single Marriage For All (Or None At All) a ‘personal manifesto of allyship’ written during the 2017 Australian same-sex marriage plebiscite.  Opening with a few bars of ambient melancholy, the track then plunges headlong into a minor-key funk groove featuring squalling guitar, fretful drumfills and underneath it all, nearly omnipresent organs. Suddenly, everything drops out so bass and drums can say their piece before we fade to ambient disquiet.  Somewhat ironically, if that’s not a musical metaphor for pre-wedding nerves, a several year-long rocky relationship and the subsequent realisation that you’ve been screwed in the divorce courts, I don’t know what is.
(Out now on College Of Knowledge Records)

Posted on 21st February 2020 no comments