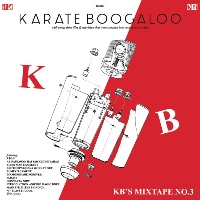 Continuing their mission to interpret classic film and TV themes that have been sampled in hip-hop via their left-field, retro library music style, it’s Melbourne crew Karate Boogaloo with blaxploitation number, Bumpy’s Lament from the Shaft OST. Originally a relatively sedate piece of jazzy mood music with the lightest of drums and percussion, KB render the thing into a faster, insistent slice of live boom-bap that might well end up getting sampled itself. The track is the first to be lifted from the next instalment of Karate Boogaloo’s mixtape series – entitled KB’s Mixtape No. 3 – Songs from Film & Television which drops next month.