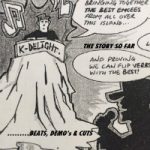 It’s been a minute since we’ve heard from K-Delight but with a new studio album imminent, what better way for him to generate buzz than to make another album with the self-explanatory title Beats, Demos & Cuts available as a free download for six whole days? K Dilla describes it as a selection of his favourite tracks on various labels along with some unheard demos which feature Killa Kela from his Prime and Kela days as well as Ultra V before he was in Universal Soldiers.

Also amongst the nuggets included, you will find a demo KD did under the name Stolen Innocents on Disorda’s Mind the Gap Vol 1 cassette along with a some tracks that came out on Ruf Beats and Playing Around Records, the label KD and Evil Ed ran in the Noughties. The album features production from the Voodoo Guru, Royce Rolls and HNS and highlights include everything lifted from 2008’s excellent Audio Revolution (but especially The Real Thing feat. DJ Kentaro, Return Of The Jedis feat. Lewis Parker and Wildstyle Dream feat. Chrome) plus moody instro Cyberspace, the summery Wonder Years and How Many DJs – basically a track-long extension of the best sample used in Audio Revolution’s Life And Times Of A Scratch Machine.   Cop it HERE – and remember the link is only valid until 6 August 2019 at midnight when it will disappear like Cinderella’s carriage – albeit a more boom-bap version without wheels. So – er – not that much like Cinderella’s carriage, really.

Posted on 1st August 2019 no comments