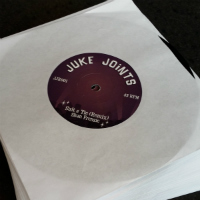 It’s been a while since a decent cheeky version of something has made its way monkey-wards and what do you know – here are two at the same time! That’ll be Oz-based Juke Joints crew then whose Shan Frenzie is up first with a belt and braces funk version of JT’s Suit & Tie. I think we all know JT’s original version started out all chopped and screwed and then forty seconds in flips the script to an anodyne contemporary take on a funk beat. Frenzie’s having none of that though. Forty seconds of his intro and you’d be forgiven for thinking we might be heading into lo-fi indie rock territory. But just when you (and the dancefloor) are thinking ‘wtf?’, along come the organic funk drums and it’s hands in the air time. Meanwhile, Hoopty & A Bakers Dozen deliver their Without Da Funk (Tabu edit) – a pounding mash-up of…one Marshall Mathers and Daft Punk. Yep – they’ve created a monster – though it’s still all about the Frenzie cut for the monkey’s money.
(Out now on Juke Joints)