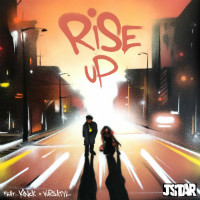 JStar returns very shortly with his Rise Up EP and the monkey is honoured to be able to premiere the whole thing before the drop date.  The release showcases what is, in effect, a missing track from 2016’s Stand To Order LP since Rise Up wasn’t quite ready when the album dropped. As the title suggests, it is a message of empowerment if not downright revolution. Not sure what could have got J so exercised in such a blessed and enlightened era of dicks-at-dawn politics but there we go.  Assisting in this musical insurrection are singer Kinck, Lifesavas rapper Vursatyl, remix shock-trooops Red Astaire, Wrongtom and Back2Jungle plus Manasseh on mixing duties. Expect full-on digi-dub vibes with the sweetness of Kinck’s harmonies juxtaposed with sixteen bars of Vurtsatyl grit.  Wrongtom and Red Astaire take the digi-dub template in differing but equally pleasing directions while Back2Jungle delivers beatless ambience – just kidding – I meant rolling dnb that builds and builds, of course.
(Out 22 July on JStar Records)