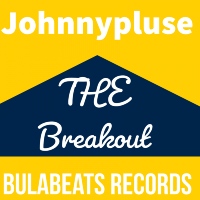 News of what’s next in the bomb-bay for Bulabeats comes mere weeks after the release of Zero The Desk’s The Secret Edits Vol. 1, as Johnnypluse announces forthcoming single The Break Out. While (on the one hand) this sees Mr Pluse return to his favoured sonic territory of bass-heavy breakbeat music, it also sees him escape from the pigeonhole by flavouring proceedings with the spiciest of Latin funk ingredients and head in a Bronx Dogs kind of direction. Of course, JP is nothing if not generous and since it’s a while till The Break Out actually drops, he’s giving away a dub mix of another track – Loud Places – which mixes up the breaks and the reggae, for free. Cop it on the second player below.
(Out 4 May on Bulabeats)