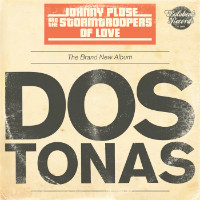 Three years dressed in Stormtrooper outfits made from stuff they’ve found in Wilko, causing a noise like a sentient ’80s Atari yelling through a megaphone from the window of a sirens-wailing Jamaican police car seems to have taken its toll on Johnnypluse & The Stormtroopers Of Love. Why? Because Dos Tonas is their second and final full-length effort. Say it ain’t so! Sadly, it is so – but that doesn’t mean our lovable full-time Irish party warrior-heroes are going to bow out without making a hullabaloo – indeed, on this, they provide nine tracks worth of audio carnage – or sixteen if you cop the Juno exclusive with all it’s extra bits and bobs.

Released a mere year after its predecessor, Ape Panic, there’s been barely time for any sort of build up and indeed only one single will have preceded the album’s release before it drops this month. That single, the vintage sample-using, lo-fi skank Talking About The! – arguably the outfit’s most restrained and pleasing yet – does however appear on Dos Tonas along with more traditional fare such as opener Good Morning Satan and O Jesus Funk beloved of the gurning glowstick gang. They do however close the LP with an extremely mellow number – oh wait – no – fooled you – it’s the part ambient/ part skankin dnb craziness of All The Best Now. JPSTOL then – nutters to the very end.
(Out 12 June (Juno exclusive)/ 15 June on Bulabeats Records)