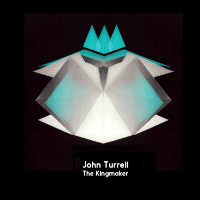 Stop what yas deein and listen up. Wor John released an album a few years ago and ye meet have missed it. Nivvor mind that though since the monkey’ll be gannin on aboot it for a few lines now ta fill ye in like. What really? A re-release of John Turrell’s 2013 debut solo LP The Kingmaker already? Even back then the man was singer in the Craig Charles’ Fantasy Funk Band by popular acclaim and Smoove & Turrell’s rise was well underway with a second LP that cemented their sound as a blue-collar amalgam of neo-northern soul and Chic-era disco (albeit with the occasional folksy detour) not to mention an imminent third album. You’d have thought a critically acclaimed solo JT effort the calibre of The Kingmaker would have gone supernova. Then again, the original promo for the LP put out by then-label The Big Chill made a tacit comparison between JT and Mick Hucknall in the opening sentence and with friends like that, you certainly don’t need enemies. Happily now, Smoove & Turrell’s label Jalapeno Records has done the decent thing by acquiring the rights to Turrell’s solo effort and putting it out again – now for the first time on digital and with two extra tracks.

But what can one expect from Turrell-minus-Smoove? Unsurprisingly, something not entirely dissimilar to a Smoove & Turrell album – which is almost certainly good news to everyone. Obviously this will partly be to do with the presence of JT’s epic voice and his by turns canny and soul-baring lyricism but also partly to do with the fact that producer Nick Faber has an ear and taste for beats not entirely dissimilar to one S. Moove esq. with plenty of 60s blues and soul along with 70s funk and disco influences filtered through contemporary production values. One thing’s for sure though, the making of the album was both a very personal and necessary cathartic experience for both Turrell and Faber – the lives of whom the former has described as being “upside down” at the time the album was written. Connected to this is the fact that, as with much Smoove & Turrell material – (Beggarman’s Disco or Now That Love Has Gone for example), The Kingmaker has a strong social conscience. Turrell also notes, “it was written at a time when I felt so much injustice for the honest working class of our country.” He’s not kidding. The slow-burning anger of blues-funky opener To The City gets stuck in straight away with a pop at the Augean Stables of the Square Mile while the title track – all funky organic drums and fuzzed-out retro organ (not to mention being the best cut on an LP of great cuts) – implicitly lines up another worthy target in the shape of meddling old rightwing spider Rupert Murdoch and the, “Long tall stories from the red top bibles.” It’s not all about the dancefloor-friendly material though and if you did happen to be a label looking for mainstream crossover, numbers like the emotive piano-led Day In Day Out and the strings-rich These Things have got the ballad-loving demographic locked-down while simultaneously keeping shit real. But while one might argue that there is a slightly higher proportion of slowies to dancefloor bangers on The Kingmaker than on any given S&T album and that Smoove’s beats and bass are a tad heavier – JT’s secret weapon remains the same – the facility to marry a world-class voice, lyrics and ear for a hook with great producers and it makes him one of the most important performers in the UK.
(Out 1 September on Jalapeno Records)