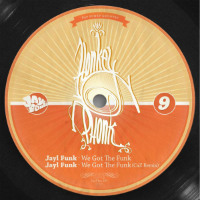 Who got the funk? We got the funk, it would seem – ‘we’ meaning Jayl Funk – though whether that’s the royal ‘we’ is a little ambiguous since cohorts CaZ are there with a remix too. JF goes large with what sounds (when the bass finally kicks in) a bit like the rhythm to Dee-Lite’s Groove Is In The Heart – done by afro-funkers plus a side helping of Stax horns. And some flute. And some squalling soul guitar. In fact pretty much as many musical funk motifs as he can squeeze in. CaZ on the other hand go hard on the electro-funk tip. Royal ‘we’ or not, this is two energetic slices of funky breaks whichever way you look at it.
(Out now on Honky Phonk)