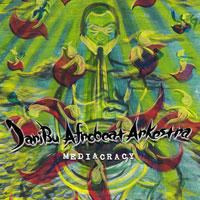 Japan’s hard-gigging Jaribu Afrobeat Arkestra (not to be confused with Leeds, UK-based Ariya Afrobeat Arkestra) have got a new album out and it’s called Mediacracy. It’s a slightly unfortunate name because with a Yank accent that could end up sounding like ‘mediocrity’ rather than a neologism presumably intended to be a comment on our media-obsessed culture. And that’s unfortunate because those in the know (and among them I include funk connoisseur Tobias Kirmayer of Tramp Records on whose label this is being released) rate JAA’s second LP of eleven tracks rather highly. Check them in action on the video to the title track (below) as the band all seemed to be having a whale of a time – particularly the young lady and her maracas at the front. Yes I did just say that. And you have to agree, it’s not often you get news of an epic double-Afrobeat LP and a lame double entendre in the same post. Don’t worry – it’ll all make sense when you see the forthcoming movie tie-in Carry On Fela.
(Out 30 January on Tramp Records)