JAMES HUNTER SIX: Whatever It Takes 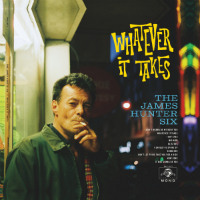 The James Hunter Six pretty much arrived at their spiritual home when they signed to Daptone Records a few years ago given the label’s world-beating ability to recreating ‘that’ authentic sixties soul sound in the production studio. Hitherto however, Hunter and crew have been one of the lower profile signings on Gabriel Roth’s roster, arguably overshadowed by the presence of the mighty and sorely missed Sharon Jones and Charles Bradley – though ‘profile’ in this case is all rather relative since Van Morrison identified Hunter’s talents as far back as the nineties and Hunter’s pre-Daptone releases garnered acclaim from the likes of Rolling Stone and the New York Times. The chances of Hunter maintaining minimal presence on any musical radar grows slimmer by the day though, now that the second LP Whatever It Takes is out.

Unlike the rest of the Daptone crew, Hunter hails from the UK, though you won’t find the slightest trace of Essex in his soul croon which has frequently, and with considerable justification, been likened to that of Sam Cooke – helped by the fact that the soul vibe provided by Hunter and the Six is resolutely of the early sixties pre-funk rhythm revolution variety. This time around, Whatever It Takes maintains the Hunter template of mixing up early sixties rnb, soul jazz and bluesier cuts and adds in additional Latin stylings. The latter can be found on opener rhumba-influenced I Don’t Wanna Be Without You. Elsewhere it’s pretty much business as usual. Blisters is an instrumental Freddie King-ish blues stomp, How Long rocks a subtle gospel vibe, and Don’t Let Pride Take You For A Ride is an uptempo rnb soul shuffle. Highlights include the soul-jazzy dancefloor number I Got Eyes and the lilting doo-wop of I Should’ve Spoke Up. Although frankly, whichever cut you’re listening to your mind will be doing backflips at how utterly convincingly a band and singer from Colchester (with no small input from Roth’s production magic of course) can so effortlessly deliver the sound of early sixties black America. Good times then – as a certain Mr Cooke once sang.
(Out now on Daptone Records)

Posted on 3rd February 2018 no comments