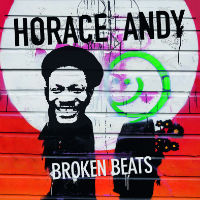 Legendary reggae voice and Massive Attack collaborator Horace Andy gets to do re-vocals on reworks of his old tracks with a host of producers on forthcoming LP Broken Beats. Badman kicks off the album and is produced by a man as instrumental in forging the ‘Bristol sound’ as Massive Attack – Rob Smith of Smith & Mighty. Horace Andy on a Bristol beat? I do hope it’s incredibly brooding and full of menace. No problem there – Smith’s tech-dub is the musical equivalent of paddling pool-sized Tarantula with a hangover and a flick knife. Andy’s contribution is minimal to say the least but occasionally his voice emerges from the bass, echoes and bleeps. “Every man wanna be a badman” he opines towards the start, for example, though it’s some time before he adds “someone to stay top of the (something indecipherable)” and later still before he cryptically chants, “Mr Politician… and what I’d love to believe is (though admittedly I’m no expert), “…Came through Rasta dimension.” Frankly, following his lyrics is like trying to follow someone through a cloud of dry ice at a packed dub reggae gig in some dark basement club in Bristol itself. Which is both fitting and somehow life-affirming.

Posted on 5th January 2013 no comments