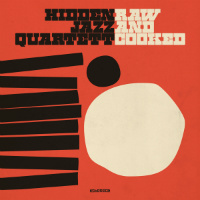 There’ll be no more lying low and flying under the radar for Hidden Jazz Quartet now that long-playing debut Raw And Cooked has finally dropped. Nope – calling themselves ‘hidden’ will be a massive fib. Mind you, calling themselves a ‘quartet’ is anyway since HDQ comprises of five of Germany’s finest jazz musicians. ‘Jazz Quintet’ somehow doesn’t quite have the same ring though, does it? The music on Raw And Cooked on the other hand sends musical reverberations far and wide.

The LP consists of nine original cuts plus two massive remixes and an instrumental. British Trinidadian poet Anthony Joseph brings conscious Last Poets-ish vibes to the stripped-back swamp groove of Kimberley Hotel while Greg Blackman contributes a respectable soul boy turn on the uptempo jazz-funk on Tap On The Backdoor. Smokey late night jazz club vibes for all tastes are well-catered for with Bajka doing not one but two Badu-ish turns on the smouldering Soulosophy and the equally scorching Luvlite, instrumentals Nardis and first single Wälzer yield jazzy dub and a spy-jazz theme respectively and of course there’s second single High Heels powered by UK soul legend Omar over a haunting sax motif. There’s also space for the Jon Kennedy’s beefed-up rolling breakbeat-powered take on Luvlite and Lack Of Afro’s epic remix of High Heels – one of the best peak-time party club tracks I’ve ever heard and still ‘in the box’ now four years down the line from release.
(Out now on Agogo Records)

Posted on 8th February 2016 no comments