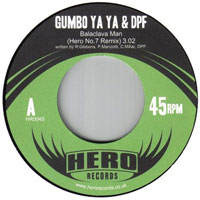 Hero Records mailed me the details of this three weeks ago with profuse apologies about the fact that they meant to send it to me a month previously (i.e. when the release actually came out) but didn’t because there was a bit of a fail on the promotional side of things. Full of swift posting intentions I then inadvertently returned the favour by forgetting this was in my inbox for the aforementioned three weeks like a colossal bumblefuck. Shame really seeing as what we have on this slice wax is, not one, but two finely crafted slices of b-boy action. As with previous releases each artist gets to remix an original by the other resulting in the funky hip-hop bounce of vocal track Balaclava Man, the psych-rock-hop instro of Black Mountain and the continuance of Hero Records’ run of dope drops this year.

(PRESS RELEASE)
After 2 recent 7”s from Hero No.7 v Mash & Munkee and Savages & Unifairfly, Hero Records’ label bosses Hero No.7 return alongside Manchester-based producer Gumbo Ya Ya with a brand new 7” of hip hop breaks and psyche grooves. The A-side features Hero No.7_s take on the track “Balaclava Man” from Gumbo Ya Ya’s “Life In The Making” EP. For this version, the Heroes strip away the original backing and replace it with a bouncy, percussion-filled b-boy break and a funky bass line, whilst retaining DPF’s incredible vocal skills. Another track for the b-boys and funky hip hop fans.

The flip side features an incredible remix of “Black Mountain,” originally from Hero No.7s “Right Side Of The Tracks” EP (the original of which received support from the likes of Craig Charles’ Funk & Soul Show on BBC 6 Music), by Manchester-based DJ and producer Gumbo Ya Ya, who has previously had his tracks released on Son Records, Area Six and Humble Monkey and also produced tracks for the Extremists from Skitz’ Titan Sounds crew. Gumbo’s remix adds harder drums, intricate scratching and extra instrumentation to turn it from the mellow downtempo flute-groove of the original into a head-banging psyche-infused hip hop track that is sure to be a future classic. Two sides of funky hip hop which will appeal to all funk, hip hop and breaks fans as well as all b-boys, b-girls and psyche lovers.