THE HAWK: Listen Outside The Box LP 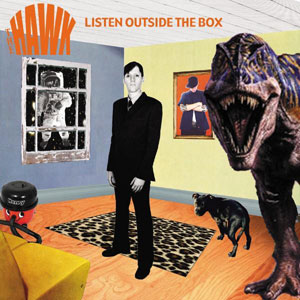 (PRESS RELEASE) Having previously garnered airplay with gorgeously ethereal debut single Candy Dream Dub on Rob Da Banks’ BBC Radio 1 show, Nerm spinning the B-side Puppets on the BBC Asian Network and none other than Steve Lamacq dropping the skankin’ breaks of last single Run Rudeboy, The Hawk (a.ka. Scott Milsom, bassist for critically-acclaimed UK funk heroes Big Boss Man) has finally made good on his promise to drop a full-length album…
Listen Outside The Box is a kaleidoscopic trip that whirls the listener through a rainbow of influences drawing from 60s psychedelia, electro and hip-hop. Opener Moon Goes Down is an infectious slice of St Etienne-style pop that showcases the sexy, breathy vocals of Hanayo while Run Rudeboy comes over like a crazy Brixton re-rub of Jay-Z’s Hard Knock Life. New promo single Electric Boogaloo (number one in the monkeyboxing.com April buzz chart and described on the same site as a track that will, “have even the suits donning Pumas and getting out a mat”) is an uptempo, old-school floor-filler with electro synths, vocoder vocals, a killer b-line and a drum break to make even Thom Yorke smile and bust a windmill on the dancefloor. The acid swirls and insectoid drum patterns of It’s Not My Fault give way to a brace of summery downtempo gems Puppets and Travelling Light – again showcasing Hanayo. Wanna Be A DJ steps things back up several notches, riding a massive electro break and throwing up a synth storm as The Hawk pays homage to the old school grandmasters and takes a wry look at the bedroom-dj phenomenon. The mellow hip-hop bounce of Last Ones Standing is a uplifting tribute to perseverance and Love Among The Stars ends the album on a glorious Brazilian drum-n-bossa groove. It’s time to throw back the lid, release the beats and listen outside the box! The Hawk is back.

Listen to The Hawk – Listen Outside The Box