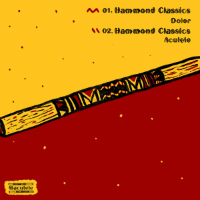 Is it afro-beat? Is it cumbia? It’s both! Say hello to Maculele 01 – the new release on Maculele Records from Hammond Classics (last heard of with his Vale A Pena EP) on which the music from opposing tropical Atlantic coasts get spliced. Of course, cumbia has some of its roots in Africa so it’s more a return to a source really. Dolor is the more overtly afro-influenced cut starting as it does with afro-percussion and what would appear to be West African lyrics while the latin piano and bass give things a firm New World anchor. Aculele is the opposite and a more overtly latin cut featuring Spanish lyrics, vocal harmonising and an irresistible cumbia groove.
(Out now on Maculele Records)