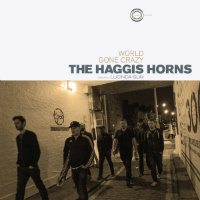 The Haggis Horns follow-up the spring release of Doc Brown-featuring single Take It back by teaming up with singer Lucinda Slim for World Gone Crazy. World gone crazy? How apt a title in a world where an American president who acts like an overgrown baby is so repellent he actually makes you want to cheer on a totalitarian dictator who looks like an overgrown baby. And that’s just the tip of the Doomsday Clock/ Climate catastrophe/ Terrorist threat/ Brexit/ iceberg. But what should a track entitled World Gone Crazy sound like? Well, for once the PR isn’t a million miles out by referencing the mid-70s Motown act Sisters Love. So far so funk and soul but where’s the crazy? That’ll be the presence of a decidedly rock guitar on the hook. Remixes from Smoove, Lack Of Afro and Sam Redmore.
(Out 6 October on Haggis Records)

Posted on 30th September 2017 no comments