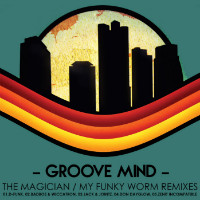 The MustBeat label come heavy and correct with the remixes shortly as they drop a big re-version package of Groove Mind’s The Magician/ My Funky Worm digi-single from back in April. D-Funk is the only artist to tackle The Magician and while most of the original elements of this gnarly wobble breaks cut are retained the whole thing is flipped for a deeper sound. If you liked Groove Mind’s My Funky Worm though (and who wouldn’t?) there are no fewer than four remixes. Badboe & Wiccatron also opt to go deep, slowing things down for a oozingly thick psychedelic breaks feel while Jack & Jointz head plump for swirling P-Funk-influences and disco don, Don Dayglow, renders the original unrecognisable with irresistibly twitchy latin space-disco drums, a four-to-the-floor house beat and Rockit-era electro-ish sound FX. Which just leaves Zenit Incompatible who drops remix of the release with the massive hip-hop/ psych-rock fuzz-out effort.
(Out 7 September (Juno Download exclusive) 29 Sept. globally on Mustbeat)

Posted on 3rd September 2017 no comments