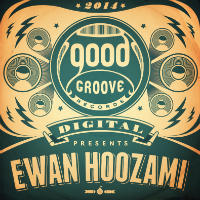 Next up from the Goodgroove gang is this six-tracker (plus two bonus cuts) on which they present the latest work of Bristol-to-Brighton transplant Ewan Hoozami. Not only does our man go back to his nu-funk roots but virtually everything on this is down to him: music, cuts and even vocals in one instance since he sings a hook and raps on Ginger & Lime. Maybe he should change his name to ‘Ewan Onemanarmi’. Then he again, he does have a little help from some friends. Impellers singer Clair Witcher adds extra nu-funk flavour in the former of a lead vocal on High & Mighty the dub of which features one DJ Cut La Vis on the – er – cut. This one’s all about piano, breaks n soul sample-driven opener Can’t Help It though. Don’t forget to grab a slice of summer-festival inspired freeness too (final player below) in the shape of Ewan’s Field Music mix where he cuts up his own tracks with vintage and contemporary funk and soul, latin breaks and hip-hop.
(Out 16 June on Goodgroove)