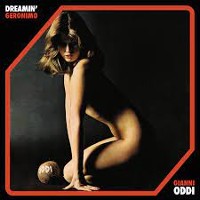 Fancy a bit of sleazy 70s soundtrack funk? Of course you do – so say hello to this Four Flies Records 12″ which cherry picks two of Gianni Oddi’s sleaziest for this 12″ release. Side A is Dreamin’ which was the closer on Oddi’s 1974 LP, 3. It opens with a splendidly relaxed drum break that is subsequently joined by lazy squelches of wah-wah guitar, warm bass, synth and, eventually, Oddi’s saxophone while Baba Yaga’s Isabella Sodani whispers and aahs dreamily in the background. Flip it over and the more uptempo Geronimo (from Oddi’s 1973 debut LP Oddi and never previously released as a single) adopts a more blaxploitation-esque appraoch as wah-wah rhythm guitar dukes it out with a soloing sax over tense drums that keep you on tenterhooks throughout, perpetually waiting for a big fill that sounds imminent but never comes.
(Out 27 January on Four Flies Records)