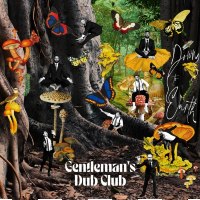 It’s been a while since news of Hollie Cook has graced MB’s virtual pages but here she is popping up again as guest vocalist on the new Gentleman’s Dub Club single, Honey. The track comes ahead of the band’s new Down To Earth LP and the music for it provides exactly the sort of easy-on-the-ear island vibrations you’d expect to find on – well – a Hollie Cook album. Let’s consider those lyrics though, ‘Sweet honey, you know how to draw me in/ Sweet honey, I come but I never win/ Don’t know what to do with this forbidden fruit, temptation always leads to you.’ I’m no expert but it sounds like our Hollie’s either got a serious jones for bee-manufactured, nectar-based foodstuff or she’s on about ‘window-shopping’ in the partner department. Then again, maybe it’s both at the same time! We’ve all been there.
(Out 29 January on Easy Star Records)