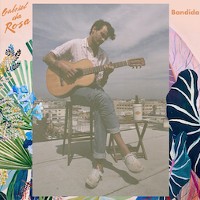 More material of South American origin in December? Yes, it’s cold – let’s consider something associated with warmth – which Gabriel Da Rosa’s new one, Bandida, has in spades. Indeed, this single (produced by Mario Caldato of Beastie Boys’ production fame), in all its summery bossa glory, very much channels the spirit of João Gilberto. Also it turns out, Brazil-to-L.A. transplant Da Rosa is signed to Stones Throw Records having made the acquaintance of Peanut Butter Wolf upon his arrival in the City of Angels and got along with him like a house on fire. What about an accompanying video? Something tasteful in black and white of Da Rosa and friends playing live in a café in L.A.? That should do it.
(Out now on Stones Throw Records)

Posted on 14th December 2022 no comments