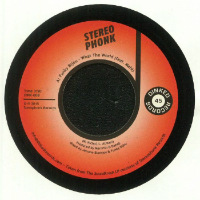 The first of two installments from the Dinked 45 camp today is this donut showcasing Funky Bijou a.k.a ces deux hommes francais who know a thing or two about what the breakers want. And on both sides of the disc here, that turns out to be Latin rather than Gallic flavour. However, if in the case of b-boy neo-soul cut What The World featuring vocalist Mafe, the sound of South and Central America is represented by the subtlest of conga/bongo action beneath the clattering drum break, Por Favor is a different matter entirely. Despite being the B-side, it’s the one the monkey prefers of the two and sounds like an old Fania cut with supercharged drums. Yes please!
(Out now on Dinked 45)

Posted on 20th February 2018 no comments