FUNKIN’ BASSTARDS: Return Of The Originals 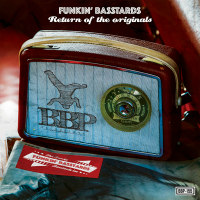 Do not adjust your radio dial, it’s not the 90s coming at you through the ether, just Funkin’ Basstards with their very b-boy friendly new four-tracker Return Of The Originals. Which, as the title suggests, draws its inspiration from a pre-bass wobble-era in which big beat went head to head with the hip-hop underground on dancefloors. The ever reliable Mustafa Akbar appears on the electro-tinged opener and shows he’s still got the Fever To Flava before passing the vocal baton to Everyman for the next two cuts. Swing It Or Leave It carries a lyrical message of one love woven over windmilling drums and a distinctive breakdown consisting of equal parts phat bass sax stabs and bollywood stylings while a Hammond also graces the bouncing jeep beats of Delight Smokers. Arguably it’s the title track that’s the strongest with yet more scorching organ licks, multi-layered percussive syncopation and man of the hour BnC joining the Basstards for their best Ultramagnetic MC impression.
(Out 26 October on Breakbeat Paradise)