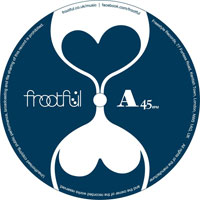 Ever wondered what Bebel Gilberto would sound like if she sang in English? Now’s your chance to found out as Nick Radford, a.k.a. Frootful, hooks up with Ambassadors Of Sorrow vocalist Angeline Morrison for a latin makeover of Colours album track Slowtime. It’s the very thing for a sunny, lazy afternoon, spent getting slowly drunk as you ponder life, love and all its complexities. Which is a shame really, because as a resident of the UK the first bit will be impossible for the next six months and, now I think of it, so will the second, because who wants to get slowly drunk when the thermometer’s registering single figures and it’s pissing with rain outside. Bugger. Also comes with Latin Strut and an energetic Lack Of Afro instrumental re-work of Slowtime to ensure you get a bit of warmth in your bones down the jazz club – should you be that way inclined.
(Out 7 November on Freestyle)

(PRESS RELEASE)
Frootful, the name guitarist Nick Radford records under, has already established itself as one of the classiest acts on Freestyle in 2011. The single Fish In the Sea received critical plaudits, much radio and club play and the subsequent album ‘Colours’ was a JAZZ FM Album Of The Week.

And now Frootful bring to us what must surely be one of the most sublime, beautiful and touching records Freestyle has ever had the pleasure to release! Slowtime was one highlight of the debut album, featuring as it does the wonderful vocal of Nick Radfords’ long time musical collaborator Angeline Morrison (The Ambassadors Of Sorrow).

This new re-imagining of the track infuses the composition with an extra layer of mellow, super chilled latin atmosphere, beginning with haunting strings and then a gentle back beat as Angelines’ voice sounds simply amazing as she recounts the story of heartfelt love.

Latin Strut is a track which was just crying out to be released on a dance floor filling 12 inch single format, so that is what Freestyle have done. This is pure dancefloor juice and no mistake.

Finally, Lack Of Afro (Adam Gibbons) gives us his drums and horn driven reworking of Slowtime, a complete rebuild from the foundations up that couldn’t be more different to the original version, and it is dynamite and of course is totally 100% exclusive to this brand new single from Frootful!