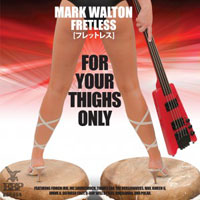 Mark Walton a.k.a. Fretless’s new LP is called For Your Thighs Only and features an attractive pair of naked female legs standing athwart a giant pair of bongos. Ok Fretless, you have my attention. Expect a twelve tracker of bass music featuring a range of Aussie vocalists that spends about a third of its time shaking booty down at the reggae/ ragga/ dubstep end of the musical street and then with flagrant disregard for generic consistency hops the fence into hip-hop’s back garden and after a brief spell with (among others) Kween G on best track The Report, legs it through territory inhabited by P-funky electro (SOS), Kasabian (no, really – check Kat N Mouse), minimal funky downbeat (Plucky), then back to hip-hop, and finally back to downbeat again. Presumably for a nice sit down and a cup of tea. Well – a stubby at least. Check opener Let Go The Past below and the Juno player for audio snippets of all tracks and Youtube preview below that.
(Out now on Breakbeat Paradise)