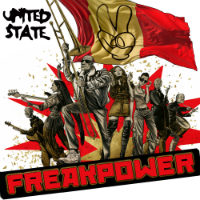 What better time for nineties groovers Freakpower to return with the United State EP, their first drop in twenty years or so? Trump is in the Whitehouse advocating guns for teachers and a nuclear spanky botty for Kim Jong-Un, the UK is on course for self-inflicted economic disaster, and Putin is going to be ‘voted’ Russian president again next month. Who wouldn’t fly their freak flag high at such goings-on? United State (nice title – positive and topical) picks up where nascent big beat cut Can You Feel It of second LP More Of Everything For Everbody left off. Perhaps that’s less to do with former band member Norman ‘Fatboy Slim’ Cook though and more to do with singer Ashley Slater’s recent collabs with Rory Hoy though. And if Cook is no longer present, Slater still convinces up front as an elder statesman of subversive party music. Three others of the original line-up (bassist Dale Davis, guitarist Tony Remy and vocalist Kate Cameron) are also present and correct and joined now by Slater’s Kitten & The Hip co-star (and wife) Scarlett Quinn on backing vox, plus a new keyboardist and drummer.

But what about the music? That’ll be pleasantly full of promise, since you ask. Opener Hear My Call features an acid synth intro, big beat drums and a soaring Primal Scream-ish gospel hook with Slater calling for unity and positivity, “Oh my God it seems to me, this world is on fire, but if you check your history you might just be inspired.” Soul Clap kicks off with sort of vocal harmonising last heard from The Beach Boys circa 1970 before drum fury and guitar pyrotechnics take over and the danceable-but-angry Revolution punches with similar power though it is stylistically closer to the groove-laden funk-rock of back-in-the-day number Freak Power. Like all the best political best songs too, its hook-filled lyrics cannily avoid proper nouns. Closer, The Dollar is the mellowest cut and chugs along three parts Marvin Gaye’s Got To Give It Up to one part P-funk with a crunk bridge. No, really, and at the same time it successfully carries off a semi-comic ‘I’m broke again’ (plus an implicit, ‘and the ‘man’ is to blame’) vibe. In short, United State manages to display pop-savvy, underground credibility and be a party-priming call to arms. Not bad, as returns go. EP promo mini-mix below and Soul Clap video below.
(Out 19 March on HipKit Records)

Posted on 28th February 2018 no comments