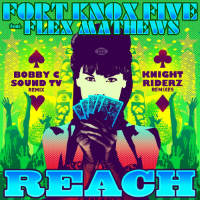 The final single to be lifted from Fort Knox Five‘s Pressurize The Cabin LP from last year is Reach featuring DC emcee, Flex Matthews making this, fittingly, a DC thing all round. Equally fittingly, it’s a summery slice of party boom-bap on a De La/ J5 tip turning on a 100 bpm beat replete with horns and funk guitar licks. Also invited to the party are remixers Knight Riderz who turn in both a trap and a dnb mix to keep the kids and aging junglists happy along with Bobby C TV who turns in a respectable ghetto funk mix. Perhaps unsurprisingly though, round this way, it’s still all about the original.
(Out 1 July on Fort Knox Recordings)