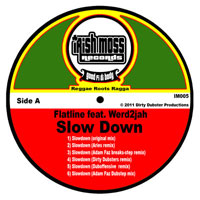 Flatline are another signing to Dirty Dubsters’ Irish Moss label, and on Slow Down they deliver a future dub bassline with enough clout to terminate the beating hearts in any ribcages not protected by a safety cushion of low-frequency-resistant, spongy, tarry lungs cultivated through years of ganja abuse. Not to be outdone a host of remixers (the Dubsters among them) compete to up the tempo and dark the whole thing up in a crazy genre death match featuring nu-skool breaks, dubstep, drum n bass and UK Funky to ensure that those not slayed by the initial future dub low end assault are forced into such unaccustomed activity that they keel over and expire within a few bars due to clogged arteries or emphysema. Or both. Should’ve listened to vocalist Werd2Jah and slowed down. Still, more fun than a Christmas detox. And safer too if the news is to be believed. Which it probably isn’t.
(Out on Irish Moss Records)

Posted on 3rd January 2012 no comments